‘Tis the season!  It’s the first week into a busy December.  Rick Anderson and I performed strolling magic for the Multicare Festival of Trees.  It’s our eighth year of doing this on and off, and always a fun way to kick off the Christmas shows.  The trees and decor at the Tacoma Convention and Trade Center are truly amazing.

The next evening I performed for Longview Fibre at the Cowlitz County Conference Center.  It’s a beautiful venue, and although I performed for the fair there last summer, the Ballroom was not used during the Fair.  (It’s too nice!)  Thanks to Kathi and Mike with the Conference Center for all of their help in arranging the details and connecting me with Fibre.

I brought the house down.

Literally.  This was so funny, and I’m lucky that I happened to have my camcorder running.  The reason behind the whole “paper cutter” premise is that Fibre produces all sorts of specialty papers.  And, in the course of working in the mill, people occasionally get “paper cuts”…

The next day I headed up north to Ferndale to the Silver Reef Casino.  It was my first time performing there also, and the banquet room was beautifully decorated.  The company, Sauder Mouldings, makes trim and moulding that is sold around the world.  They’ve been able to do well despite the bleak construction market locally.

The next morning – with all of three hours of sleep given my commute and prep time – I was at the Olympia Country and Golf Club for their Santa Breakfast.  This has become one of my favorite traditions.

I first performed for the Breakfast in 1998.  With the exception of a couple of years where they hired other entertainment or I wasn’t available, I’ve been the “opening act” for Santa Claus.  Originally it was the first Saturday; then the first and second Saturday; and now it’s the first three Saturdays in December.  And they fill up! 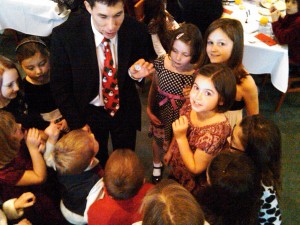 Many kids come up and can describe tricks that I haven’t done in several years, and it blows me away.  Some of them have literally grown up seeing me perform!  One “boy” – a teenager taller than me – introduced himself and says that he’s been coming to see me perform since he was like six years old!

After that I headed up to Kirkland to perform onboard an Argosy cruise for a software and graphics design company called Allovus.  This was another family event, and over the course of two and a half hours I had time to meet and perform for all of the families and adults.  Santa was there (following me, or vice versa?) and the gifts were all right out of the ’70s and ’80s; Rubik’s Cube, Etch-a-Sketch, Slinky, the toys I grew up with.  Cool.