Someone recently posted a super review for me at yahoo.com.  It’s from a client who’s hired me twice, most recently for New Year’s Eve.

WOW…No wonder it’s called Amazement Productions. We had Jeff at out 2011 New Years Party and I must say it was filled with so much entertainment. This was the second time (Birthday Party) we have seen Jeff in person and we look forward to the third time we see his amazing talent. The Adults and Children alike were amazed at his brilliant talent. Your missing out on a wonderful experience for you and your family if you don’t see this performance.
-Anthony E., Roy, WA

This got me thinking about online reviews. They’re important now, and will likely be even more important in the future. Why? You can’t trust everything you read on a person’s website. It’s not that difficult to have a fancy website, great photos, even professional video without substance to back it up. So, more and more people are searching for online reviews.

A recent survey shows that 83.8% said that they would trust users reviews over a critic. I’ve been collecting online reviews for about a year and a half now, thinking that comments left outside of my own website carry more weight than quotes on my own site. The question is, where should you post reviews?

I’ve been guiding folks to leave reviews at Yahoo.com as it shows all reviews.  Yelp.com has an interesting process for accepting and posting reviews. Although it bothers me that many of my reviews – all posted by various fans and clients – are not visible on Yelp, I do understand their logic. However, it’s more useful for me to use the Yahoo site. It’s rather disheartening for a client to go to the trouble of creating an account, signing on, and creating a message… only to find that it won’t even be displayed. Major bummer. (Hey, where can we review Yelp?)

The method behind Yelp’s madness is revealed here:

“One question we occasionally get asked on this topic is why reviews sometimes “disappear” from a business page. While the overwhelming majority of reviews aren’t affected, we figured this might be a good time to offer some specifics on why reviews sometimes don’t appear on business pages (and why we think this helps make Yelp the most useful consumer review site around).

“Yelp has an automated Review Filter that many people are surprised to learn was put in place soon after our big launch in 2005. Of course, it’s evolved over the years; it’s an algorithm our engineers are constantly working on. Its purpose, however, remains the same: to protect consumers and business owners from fake, shill or malicious reviews.”

You can still view the hidden reviews, but you’ll need to look for the grayed-out “x filtered” text link above the “About this Business” subhead. The “x” will include the number of filtered reviews; currently 5 in my case. As only one of six reviews are visible, that puts me batting .170. Ouch. 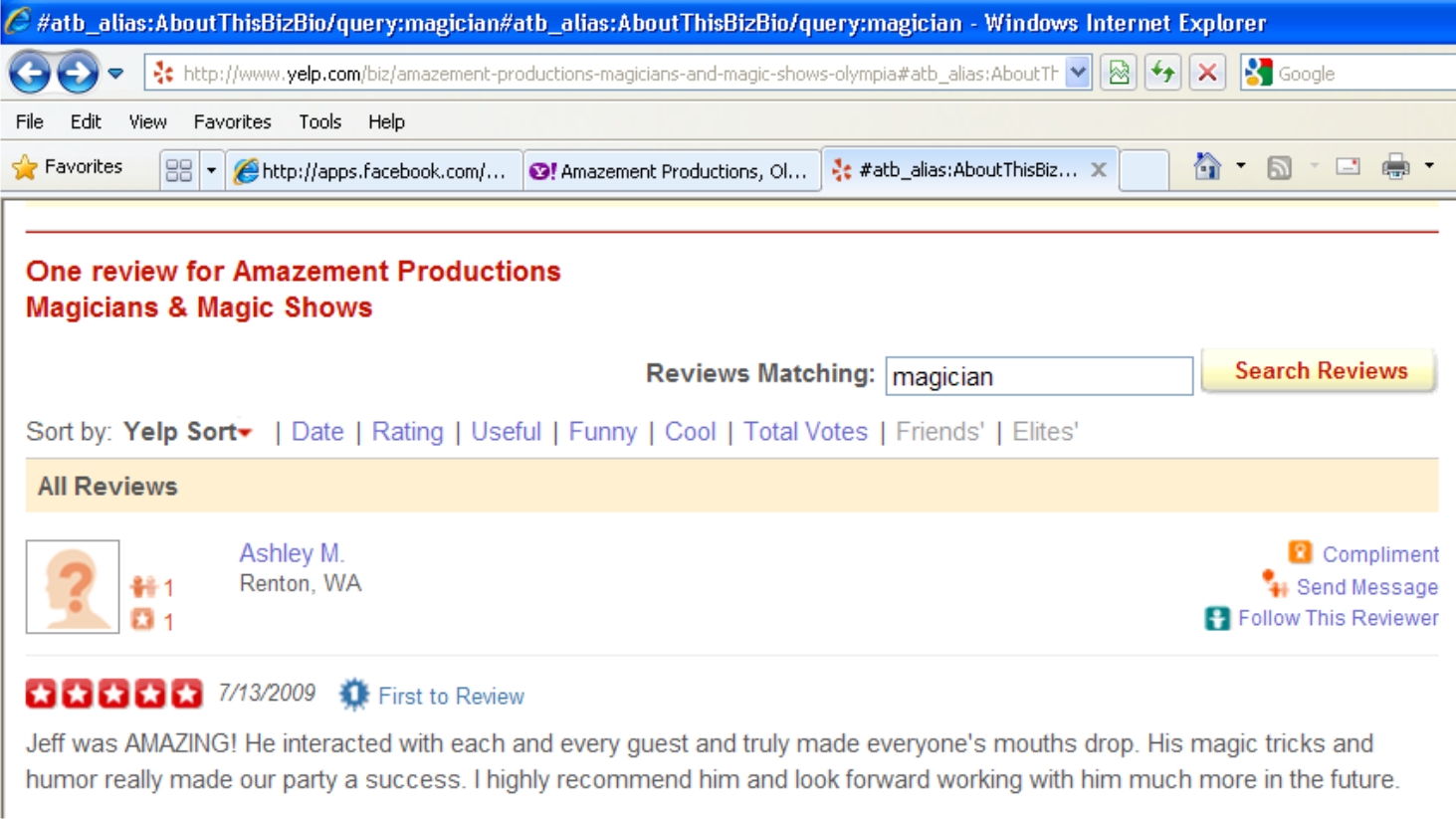 I went through my “filtered” Yelp reviews and reprinted them here.

“I hired Jeff to perform at my husbands college graduation party. We have seen Jeff many time at local community events, have always loved his shows and I always thought I should hire him! Finally, the time came when I needed entertainment for a party and he was my first and last thought. Let me say that he did not let me down!

“Jeff performed a strolling magic show, going from group to group and showing his tricks. The adults and the children were all in complete awe!! Not only are his tricks incredible, but he has a great sense of humor and is very witty…which is great for the adults!

“When Jeff finally wrapped up his show and came to check out with me, he had a line of kids following him around, asking him to do more tricks! Jeff”s show kept the guests talking long after he left, with most people wanting to know how to get in touch with him.

“I can’t end this review without saying that my son actually called Jeff and left a message. I figured with his busy schedule he probably wouldn’t have time to call him back but not even a day later my son received a phone call back. Jeff talked to him about how to find books at the library and things on-line and then sent him a link (through my email). We couldn’t wipe the smile off his face!

“I would hire Jeff for another event in second! He was worth every cent and more! He is a true performer and this community is lucky to have him!
-Tami C., Olympia

“I highly recommend Jeff Evans. Not only did he show up on time at my college graduation party in Renton, but he dazzled a really tough crowd of about 30 people ages 18 years and older. Even employees of the restaurant were lining the entryway to my party to see Jeff’s performance!

“Jeff is a wonderful magician and an entertainer. I guess I can also call him part comedian, because he made the entire crowd laugh as he selected members of the audience to participate in the tricks he performed during his interactive act. His performance was nothing short of spectacular.

“I have already recommended him to friends and family, and if there is another event of mine where I need entertainment, he is definitely on the top of my list for candidates!
-Gerald P., Renton, WA

“We’ve had Jeff be part of our Summer program six times over the past eight years. He never ceases to amaze me or the audience. Kids and parents attend our 4th of July Festival just to see Jeff. If you haven’t seen Jeff in action, it’s time you do. You won’t regret it.
-Doug F., Grays Harbor

“Jeff is fabulous!!! My daughters 7th Birthday was a hit all because of Jeff. The show involved all the kids and parents as well. The amazing tricks kept all the children excited to see what was next! Jeff’s sense of humor engaged the parents attention which is a plus! The balloon hats were great for favors for all the kids.

“We would highly recommend Amazement Productions for any event you want to turn into a fun and interactive time. GREAT GREAT GREAT!
-Kirstie H., Olympia

“Jeff has done several events for Let It Ride Casinos and Events Extraordinaire.  He is not only professional, but engaging and very good at staying focused on the guests. Oh yeah, his magic is unbelievable as well.
-Cory T., Renton, WA

And yes, if you’ve seen my show and would like to post a review, please do it on my Yahoo account. Unless you’ve posted another review on Yelp, and in that case put it there.

My question for YOU, my reader – do you have a particular review site that you like?  Which one and why?