The festival is free and fun with a bunch of activities and entertainment for kids.  When I arrived I was glad to see physical comic Bill Robison on the Huntamer Park stage.  He has this incredible rubber face with the most insane expressions.  His choreographed fight with an invisible fly is pure genius.

Reptile Island Petting Zoo brought a giant tortoise, alligators, Komodo dragon, & more.  You can’t beat reptiles! Last year I performed on stage, and this year I performed strolling magic.  Since the weather was a bit drizzly early on, I went where families were waiting in line and caused a commotion there.  Many thanks to Irene of Lacey who took some great photos and shared them with me.  Her grandson, Austin, is a big fan of mine.  He’s seen me perform at the Lacey Timberland Library and taken my Amazement Magic Workshop through Lacey Parks and Rec. 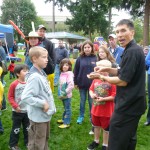 Keeping the lines amazed and amused! 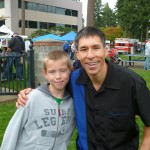 My fan Austin has been to several of my shows AND my workshop. 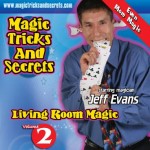 Apprentice magicians receive my instructional DVD with each of these magic workshops. 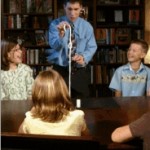 Prepare to amaze your friends!

Speaking of workshops, Amazement Productions is hosting two upcoming workshops through Lacey Parks and Recreation:  one on November 1, 2011 and another on November 22, 2011.  Both are held at Lacey City Hall.  Attendees not only receive the props and hands-on instruction, but also receive my Magic Tricks and Secrets DVD covering each routine.  No more forgetting an important element… like the secret!