I met my #1 Fan last weekend!  I performed for Liam’s 7th birthday party in Olympia.  He had seen me perform for his school, Roosevelt Elementary, two times and even bought my Magic Tricks and Secrets DVD.  His mom had mentioned that she “made his year” by booking me for his birthday party, but I guess the meaning of that didn’t really hit me until I walked up his driveway and saw him animatedly smiling and waving to me in the front window.

Liam was talking a mile a minute and was soo excited to see me.  He had even written a letter to me and presented it to me that day.  He’d included a hand-made stamp and glued it in place on the outside of the envelope.  Now THAT’S good! 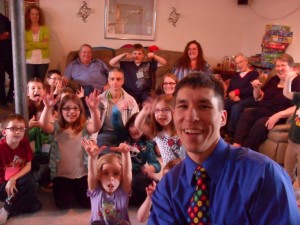 His mom and dad video recorded the whole show.  I predict that it will be one of those home videos that you watch after growing up and just laugh and laugh about.  Liam had the time of his life.  Towards the end of the show I had him helping with a trick and I noticed that his hair was wet like he’d been swimming or playing outside earlier in the day.  I asked him about it, and his folks decided that he had just worked up a sweat watching my show!  He was out of his seat more than in it, so I guess that was it.  It’s nearly a week later and I am smiling as I post this just thinking back on it.

His mom, Megan, was kind enough to post an awesome review for me.

“I will tell you, Liam had the best time of his life. We thought he was going to spontaneously combust! Everyone has been talking about the show and how amazing it was. You just did such an amazing job in every way and everyone thought so. Seriously, the adults have not stopped talking about it either. I will be singing your praises for years to come! You MADE my sons birthday, and probably his year! I will make sure any of the quality photos head your way, and of course refer you to everyone! I think there were some grandparents there who will most definitely do the same as well. You exceeded all of our expectations.  Thanks again so so much for putting such a big smile on Liam’s face!
-Megan Kirkpatrick

Thank you, Megan!  It’s people like you that make my job so enjoyable.  Read this and more reviews from clients online at http://local.yahoo.com/info-22241729-amazement-productions-olympia.