If you’ve even been driving on I-90 through Kittitas County and looked over to see hay bales covered with big blue and white tarps, you’ve seen what “Hey – Tarp It!” does.  Owner Tim Ravet says his service of covering hay bales and protecting them from the weather is insurance for the hay.  Without it, the hay decomposes and loses its value. 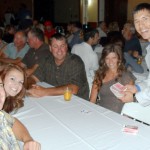 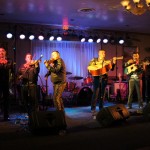 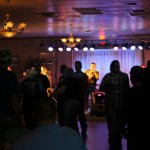 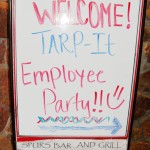 This is the second time I’ve performed for the extravagant parties that Tarp-It throws. Last time I attended it was held at the Central Washington University, but many of the parties have been at Tim’s ranch, which, I’ve heard, is huge.

The big surprise this year was the band.  Tim was in Nashville for some event and heard a fantastic band play.  He brought them all the way to little ol’ Eburg to headline his company’s staff and client appreciation party!   I didn’t catch their name, but they sounded fantastic.  (Great job by the production company, Nelson Audio.)

In the busy season Tarp-It employs up to 80 people, many Mexican.  A fantastic Mariachi band traded spots with the headliners so there was something for everyone.

Thanks to Craig Cooke with Pacific Rim Talent for booking me for this gig, and many others since 1998.