It’s fun doing things that are new and different and require skills that, frankly, you don’t have. I played the Sorcerer in the Centralia Ballet Academy’s production of The Sorcerer’s Apprentice in shows this past Friday and Saturday at the R. E. Bennett Auditorium in Chehalis. No, I didn’t do ballet (!), but I did debut several new routines, all done to the classical music that the ballet is set to. 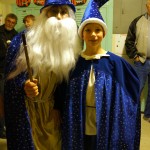 Jeff Evans as the Sorcerer and John as the Apprentice 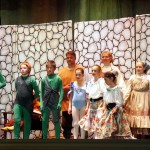 The cast rehearsing bows at the R. E. Bennett Auditorium 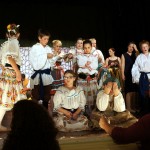 Nancy and Mick, owners of the Centralia Ballet Academy, meet with cast 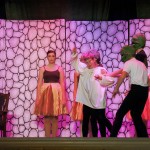 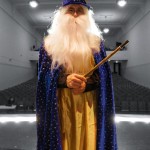 Yep, that’s me! Thanks to John for the make-up and Melinda and co. for sewing the costumes and hat. 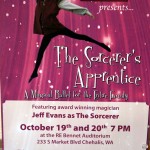 Show poster for The Sorcerer’s Apprentice 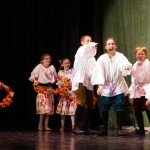 Village boys (and girls) having fun 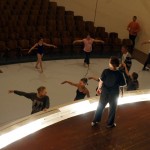 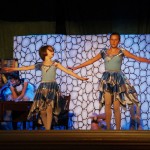 Enchanted “water sprites”, the prelude to the great flood caused by goblins using the Sorcerer’s wand.

The kids and teens are very dedicated and put in a huge amount of time to learn the dances, choreography, and acting required for their parts. It’s a huge challenge getting so many people in teh proper place at the right time in the right costume (several have multiple roles/costumes). Nancy and Mick Gunter, owners of the Centralia Ballet Academy, did a fantastic job for their first year. Plans are already in motion to make this an annual tradition.

I’ve been performing magic as a wizard for years; I created my Secrets of Wizards magic show close to a decade ago as people asked me to do a “Harry Potter magic show.”  It was a huge hit for libraries, bookstores, and kid’s birthday parties. In fact, just today I performed my Secrets of Wizards birthday party magic show in Mercer Island. Normally, though, I’m the only performer and I do a talk act. The ballet was completely choreographed to classical music, which meant that I had to not only decide which effects to use, but then create a routine that matched the timing of the music. I’m really happy with the results.