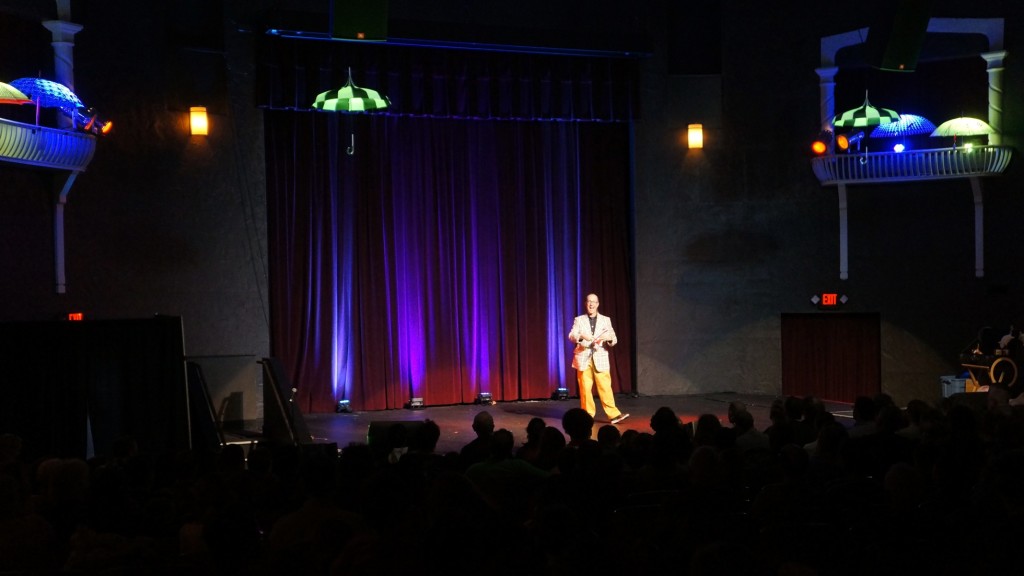 Rhys Thomas is one of my all-time favorite performers, so it was a treat getting to see one of his new routines as he emceed the Festival

This was the 4th year for the Umbrella Festival in Portland.  One of the co-creators of the festival, David Lichtenstein, is a super nice guy and trick roper/comedian/juggler who lives in Portland.  We worked the Canyon County Fair together a couple of years ago and he thought I’d be a good fit for his Festival.  So, last fall he called and put me on the bill for the matinee and evening show on the final evening of the Festival. 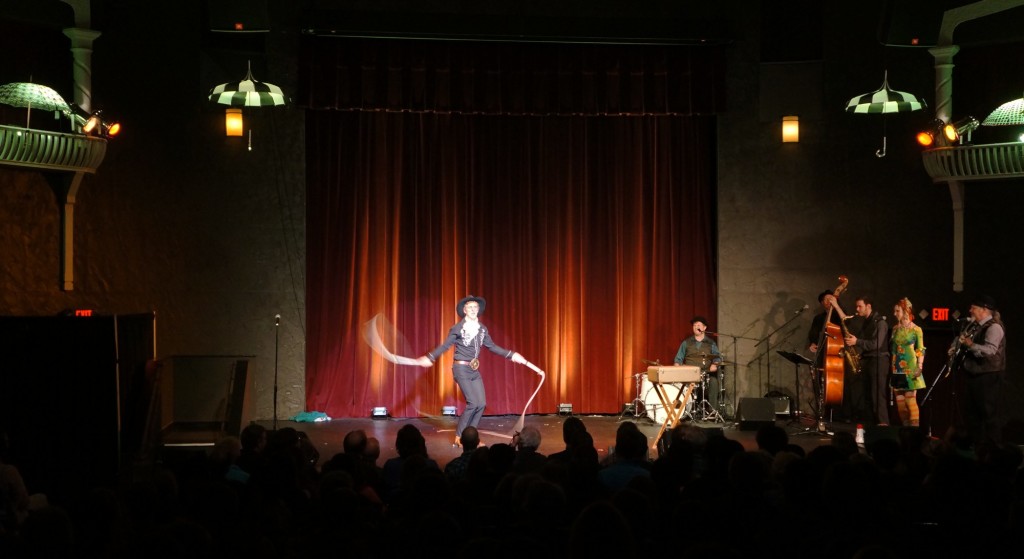 The venue for the Thursday through Sunday shows was the Alberta Rose Theater in Portland.  It was the perfect size for this style of variety show; small enough that everyone can see and enjoy the performances, yet large enough (200-something) that there is high energy feeding back to the performers.  Nice lighting and acoustics made it a pleasure whether you were on stage or in the audience. 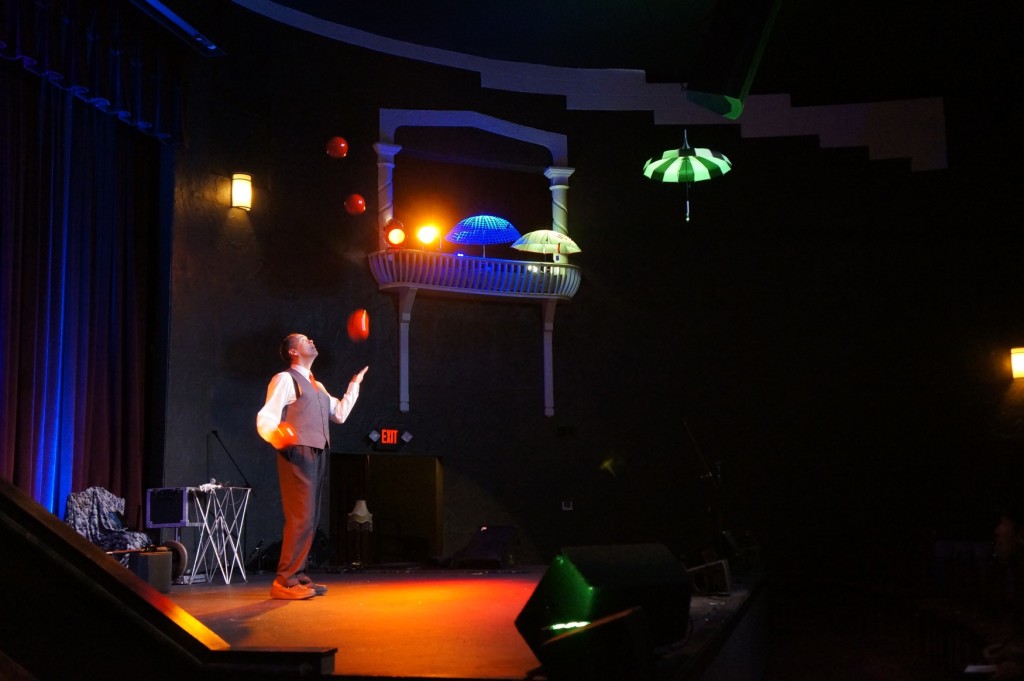 Umbrella Festival producers David and his friend, Noah Mickens, are not only excellent performers in their own right, but are also great at booking other talent.  Somehow they finagled some truly great variety performing artists into appearing on the bill, and that resulted in two fantastic shows I was able to be part of.  (And those were just Sunday; there were shows Thursday, Friday, and Saturday, too, all with different performers!)

Audiences were overly generous and appreciative both programs.  I don’t do many shows where people have paid good money out of their own pocket to see entertainment, and it truly makes a difference.

When I see a really outstanding variety performance, sometimes I have a bit of the opposite reaction you might expect:  it makes me a little sad.  It makes me sad because I know I’ll never be that good.  But it also makes me happy because I’m thankful I have a career that gives me total freedom of creativity.  It’s inspiring to hang out in the green room and chat with people who have devoted their life to their passion and succeeded beyond their wildest dreams. 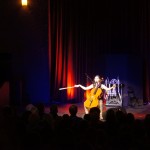 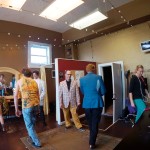 green room after the matinee show 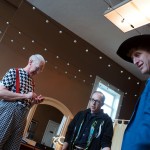 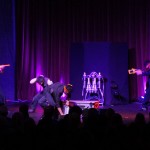 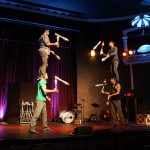 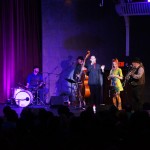 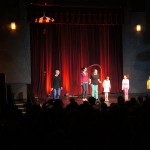 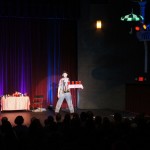 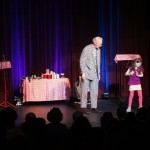 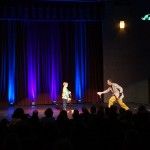 Did I just use the words “Rhys Thomas”, “rat trap vest”, and “small child from the audience” in the same sentence? 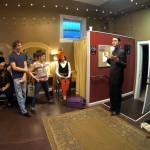 Noah Mickens rallies the troops for the evening show 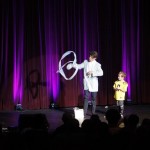 Stefano Iobani and a young spectator

It’s hard to pick a favorite because there were so many different styles of performing.  But I will:  Nanda rocks.  Each one of these guys is supremely talented at juggling, dance, choreography, martial arts, acro, etc.  (Usually in a team there is one person who excels at one special skill.  At the finale when all four execute simultaneous backflips and end in their ninja warrior poses, it’s apparent that all four of these dudes are “the man.”

However, it is their crazy sense of comedy and the originality that they bring to their creations that makes Nanda my Best of Show pick.  Just when you assume you know what they’re about to do next, WHAM – new music kicks in and you need to change your perspective to keep up. 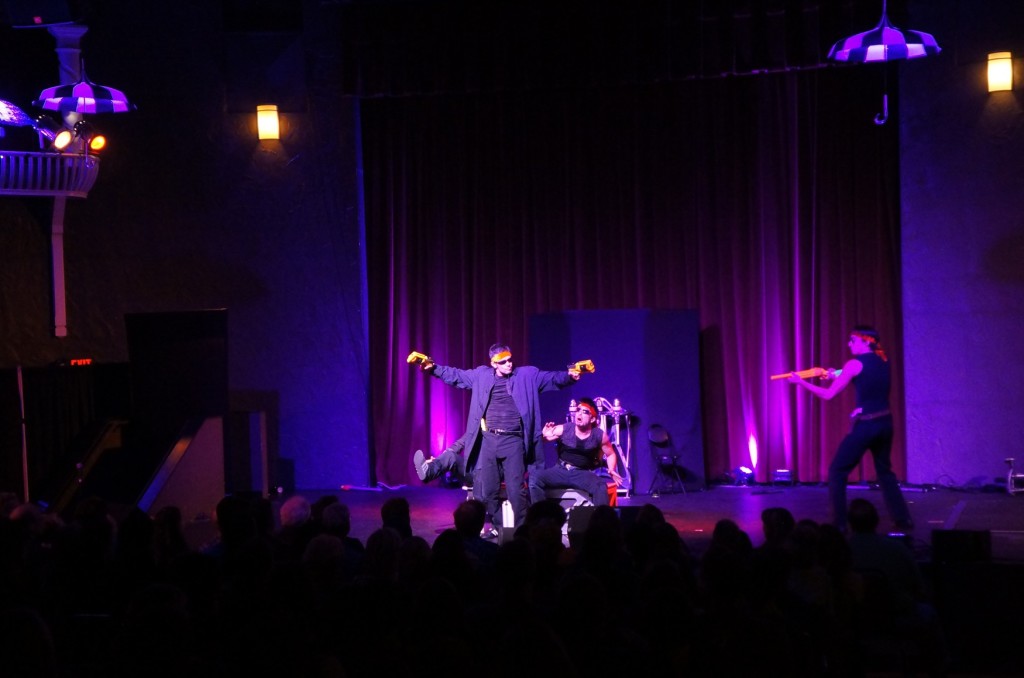 Nanda doesn’t have a lot of videos on Youtube, so you can’t really “see” their act online.  And I think that’s a good thing.  Although based in Washington and Oregon, they don’t do a lot of public shows or touring.  When you have the opportunity, pay for a ticket and see them perform.  I laughed my head off while being amazed and impressed the whole time, something that doesn’t happen very often.