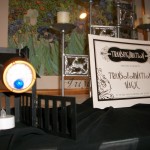 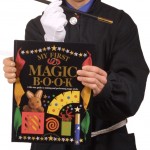 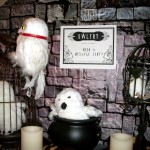 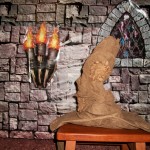 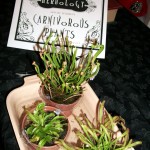 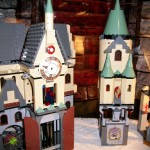 Last weekend I performed magic at a Harry Potter-themed birthday party in Olympia. I was “Professor Jeff Evans” and taught the class in Transfigurations. It turns out that the boy’s parents are huge fans of the HP books too, and went all out on decorations and extending the theme from the invitations to building a replica Hogwarts Express which they parked on their front porch. All interior walls were covered with plastic sheeting that made it look like the inside of a castle. “Defense Against the Dark Arts” was one half of their garage, turned into a chamber for an evil skull-shaped pinata for the kids to “practice” on!

Other attractions included an “owlery” for sending and receiving mail, “Magical Creatures” class with REAL goats in the backyard, “Herbology” with real carnivorous plants, and “Potions” that was apparently so convincing that one of the girls refused to drink her concoction!

Mom’s Review
“I’ve seen Jeff about 4 times (twice at a birthday party) the other times at corporate events so I asked him to come to my son’s 8th birthday. The theme my son picked out was Harry Potter. Jeff’s Harry Potter inspired magic show was the best performance I have ever seen.

“Some of the most memorial moments was the ‘Quick Quotes Quill’ magic. My son’s Grandmother is still talking about it. Some of other kids favorites was the magic red cushy balls that went from a count of 1 to 5 I think in my son’s hands (He’s still talks about and when I asked him how he though you had done it, he said, “I don’t know, it’s magic”), the egg, the card magic, and the kids loved the pop-up birthday cake at the end. I’m still laughing joyously over the spider magic and the “daily prophet” newspaper that told of the future.

“I loved how the kids at the party squealing in delight with the wallet and money magic spell you cast. The energy Jeff put in into performance was in a word simply amazing. All the kids from ages 3-adult was completely transfixed at every move you made.

“Anyone who’s looking for a Harry Potter birthday inspired party must include your show. His performance will cast a spell over the audience and for all Harry Potter fans, Jeff does an incredible job, incorporating the Harry Potter lexicon from the newspaper, to the quill and asking for spells such as “lumos”, etc.

“My husband and I loved the show, not only did Jeff entertain the kids, the adults in the room were enchanted as well and you can tell each child was wanting to know more about magic. Asking all the kids what they thought was the best was class conducted it was a Transfigurations and Defense against the Dark Arts. I know my daughter will want a Harry Potter party again in the future so we are definitely asking for your performance again. Thank you Jeff for the best Harry Potter Magic Transfigurations show ever!
-Max Pham, Olympia

Read this review and others online at http://bit.ly/aecl5T.