Although I live in Olympia, I perform several shows each year in Yelm… including two this past week! Last Friday I visited Lackamas Elementary with my Science Magic assembly and returned with my Amazement Magic Show that evening for their school family night.

Today I did strolling magic at the Yelm High School commons area as part of a Rotary Interact special event. Thanks to Andre Lyle for arranging this. Many years ago I performed for his birthday party; last year I visited the Yelm Rotary Club and we met again, and he thought of me for this promotion at school. What can I say, high school students dig magic! 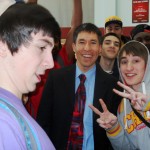 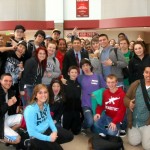 The last time I did a show at the high school was as part of a variety show hosted by my friends Alex Zerbe and Matt Baker, the “Brothers from Different Mothers.” The school has a beautiful, modern Performing Arts Center.

A few of my other shows in the area include the Yelm Timberland Library (over a dozen shows there since 1995), Gordon’s Garden Center (strolling magic for their big Mother’s Day promotion), Prairie Elementary (multiple visits since 1997), Moran Prairie Elementary, Children’s School of Excellence, Fort Stevens Elementary, Southworth Elementary, and dozens of private parties and events.