Cameras are involved,
but there are no “camera tricks”

RP-what?  Picture Skype on steroids:  the audience can see and hear me, and I can see and hear them.  It all happens in an immersive environment  that brings HD video, audio, and content-sharing to a cinematic video wall. The technology is practically invisible; I felt like I was in the same room with the audience. 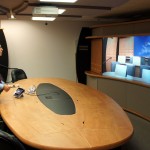 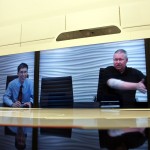 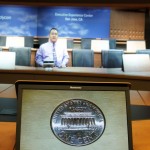 A penny in San Jose is magnified with amazing detail in the document viewer at the Bellevue RPX. 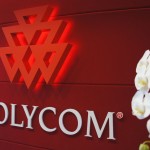 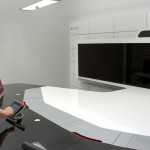 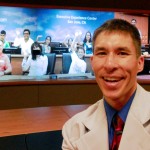 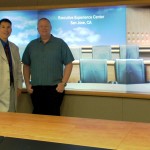 Allen was a huge help in making everything go smoothly

Their interior decorator is g-o-o-d

The history:  a few years ago I entertained for a Microsoft event.  It was a hit, and booked through Clowns Unlimited.  (Despite the name, Clowns does a lot of work with Microsoft and other corporate clients and they are much more than just face painters, balloon artists, and bouncy houses.)  Fast forward to the present:  the same manager is now with Polycom, wanted a fun and unique way to showcase their RPX studio for “Polycom Days”, and contacted me through Clowns Unlimited.  (Thanks, Michael!)

It was difficult designing an entire show with no direct audience contact.  Much of what I do revolves around physical interaction with people (pick a card, stand here, hold this, examine this, let me borrow your watch, etc.).  That element is gone.

Sure, there are certain tricks that are just “eye candy”, that you can watch like a movie or television.  However, the strongest magic tricks are those that happen in the hands of a spectator.  I wanted to create material that would make that possible.  My goal was to create routines where the magic happened in THEIR studio, in San Jose, in such a clean way that there would only be one possible explanation:  real magic.

A week in advance I mailed a Poloroid camera (yep, I still had one!), some envelopes, predictions, and three brand new decks of cards.  (I performed three shows for three different groups as they toured the facility for “Polycom Days.”)  It was a cool moment when, across the room yet in another part of the country, four people turned over ripped halves of playing cards to reveal a perfect match.  Yes!
When they’re not trailblazing the use of their “immersive telepresence solutions” to spread magic to the world, Polycom’s teleconference studios and technology are used for executive meetings and conferences.