Lawmakers and Lobbyists Gather in Olympia

The Association of Washington Business held their annual Legislative & Lobby Days in Olympia at the Red Lion Hotel. The AWB bills itself as “Washington State’s Chamber of Commerce”, and their members include businesses in all different industries.  This two-day event gives business owners and lobbyists an opportunity to talk with their representatives, discuss topics ranging from the budget to labor and workforce, health care and environmental issues.

The Washington State capitol carved from ice was a huge hit as centerpiece for one of the buffet tables. Kudos to the pros at Creative Ice!

I was invited to perform mingling magic for the social. I met people ranging from justices on the State Supreme Court to legislators to lobbyists to optometrists.  Everyone had spent the day attending meetings and listening to speakers, so they were ready to relax and enjoy some entertainment. Tomorrow morning after breakfast they’ll spend a “day on the hill,” visiting the legislature and meeting with their representatives. 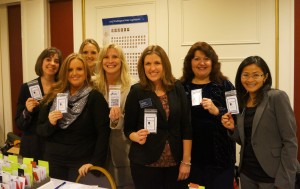 Before doors were open for attendees I performed some magic for the AWB staff and gave them all their own “Three Card Monte” magic trick.

Anne with the AWB wanted something unique to offer attendees, and I suggested the idea of souvenir magic tricks that people could take home. I created customized “Three Card Monte” magic tricks that I performed and handed out throughout the evening. Watching someone take what they’ve just learned and performing it for someone else they don’t even know is a blast! Best of all, the surprise card that appears at the end of the trick has information about next year’s Legislative Day, hopefully planting the seed to encourage people to save the date and return next year.

Rather than printing directions, I included a YouTube link along with a QR code for immediate access from any smartphone.  Check it out yourself.  (If you’d like to make the cards yourself, you’ll need to construct the gimmicked card.  It’s not fully explained here, but if you look closely at the video you should be able to figure it out.)

Video is a great way to teach magic.  (Speaking of which, I have a fantastic video course in magic.)  Thanks to Comcast for helping sponsor my appearance and the Three Card Monte giveaways.  Souvenir magic tricks are a big hit at corporate events.  Rather than spending money on trinkets like customized pens that may not be appreciated, why not give people something that they’ll want to show to their friends?

Ask me if you’re looking for creative ideas.  I have a lot of experience working with clients who make magic a theme for their client appreciation luncheon, annual banquet, or holiday party.  Call me in Olympia toll-free (877) 412-5064 or send e-mail to jeff[at]amazementproductions.com to discuss entertainment and ways to make your event fun and unforgettable.