Birthday Party Magic in the Park

Only a native Washingtonian would tempt the weather gods by holding their kid’s birthday party outside in April… and I performed for two of them today!  Luck was with us as it was relatively sunny, although windy at times.  A paper plate with most of a piece of pizza on it caught the wind and went flying off the table!  I will say this for outside parties:  it makes clean-up really nice. 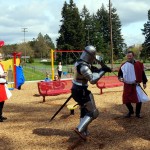 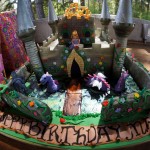 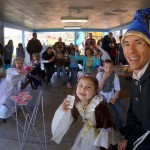 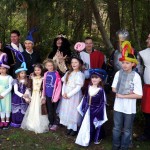 The royal family and friends 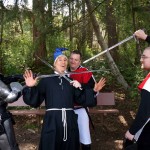 These hecklers were TOTALLY obnoxious! 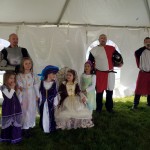 The Royal Court: the Queen, her ladies, and knights. 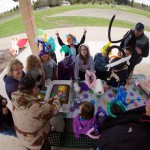 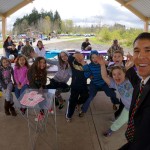 I get to see some really creative party ideas, and Madi’s 7th birthday party was off the chart!  It was a medieval, kings and queens and castles theme.  Not only were the kids dressed up in period outfits, but most of the parents were even playing the part!  Madi’s dad, aka the King, has friends that participate at renaissance fairs and do battle re-enactments, so they came with their costumes, swords, and armor.  Very authentic!

My favorite part was when the kids were “knighted” one at a time by a real knight in shining armor.  Best line of the party:  we’re lined up for the group photo and the knight, in full metal helmet, says, “That’s weird, I’ve been smiling for the photos.”

Parents, the bar has been raised!

A favor:  I’m in the running for ParentMap’s “Golden Teddy Award.”  Here’s how you can vote:  visit http://www.parentmap.com/golden-teddy , click on “Activities for kids”, “Live Entertainment”, and enter “Jeff Evans.”  Thank you, fans!