The Oregon Zoo has been community supported since 1888 – a time when there were no cars, no planes and only 38 states in the union.  The zoo began not with a grandiose intentions, but with an unexpected gift. When the City of Portland accepted bears, monkeys and birds from a former sailor on November 7, 1888, it hadn’t planned to create a zoo. The community, though, was instantly enamored of these new animals living in a park above the city.   Learn more and plan your visit to the Oregon Zoo on their website.

The Zoo wanted to commemorate their 125 years in style, and called on Amazement Productions‘ Rick Anderson and Jeff Evans to perform magic as part of their celebration.  Zoolala is the Zoo’s largest fundraiser, an upscale shindig hosted on the Zoo’s immaculately-detailed grounds in Portland.  Over thirty of the region’s best restaurants featured savory fares.  Wine and craft beer was all complimentary, and guests who were “in the mood” danced the night away to party band Cool-Ade. 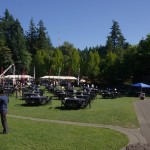 Touring the venue before the guests arrive

Rick Anderson works his magic in the VIP tent 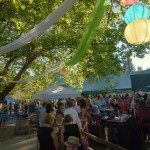 Venue, weather, and people were all in “party mode” 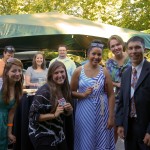 Quick peek at the Asian elephants at the Oregon Zoo

Zoolala supporters are wowed with a personal show by Rick

All of the Zoolala attendees took home a custom card trick so the “magic” of the evening will live on afterwards!  Rick Anderson created this video (below) and the custom playing cards that each guests received.   Customized souvenirs like this are much more likely to be shared with friends and colleagues, and we want the Zoolala experience to be re-told time and time again.

Kudos to Beth, Special Events Manager for the Oregon Zoo Foundation, who directed an incredible evening that was smooth from start to finish.  (Hotel reservations, parking passes, name badges, and even payment was mailed more than a week in advance.)  I was especially impressed with all of the staff they had on hand to help assist with everything from directions to explaining fun facts about animals and exhibits.
If you want unique and amazing entertainment for a fundraiser that people will talk about afterwards, send e-mail to jeff[at]amazementproductions.com or call Rick Anderson at (253) 473-5456 or Jeff Evans at (360) 412-5064.