Just back from the Canyon County Fair in Caldwell, Idaho. Kudos to Entertainment Coordinator Rico Weisman with Boise Arts and Entertainment who has been with the Fair for many years and has the stages dialed in. There was a huge tent for the audience and performer, so everyone could sit and enjoy the show. Water misters ran around the edge of the tent and were really appreciated as the temperatures peaked at just over 100 degrees a couple of the days.

I had a blast hanging out with juggler Curtis Carlyle and trick roper Leapin’ Louie Lichtenstein.  Highlights were Curtis’ hilarious banter with the audience and watching Louie toss an aluminum can into the air and cutting it clean in half with the crack of a whip.  The final show of the Fair, Curtis and Louie combined to do a team juggling show, each one trying to one-up the other with clubs, balls, shaker cups, cigar boxes, whips, and clubs.  It kind of takes me back to the “Renegade” shows of juggling festivals where really talented performers jazz and put on an amazing show.

Boise professional magician Kipp Sherry introduced himself the first day of the Fair.  We’ve met online – I even bought a prop from him a year ago – so it was nice to meet him in person and get to chat over dinner.  Kipp and Curtis both took several of the photos of my show below – thanks, guys. 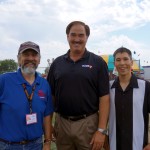 Rico (Entertainment Coordinator for the Fair) and Larry (KTVB anchor) 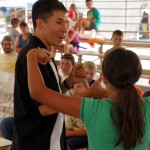 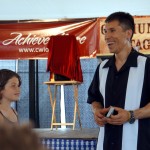 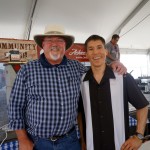 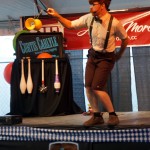 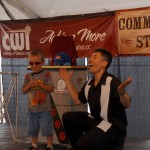 The ol’ spoon on nose stunt. Photo by Kipp Sherry. 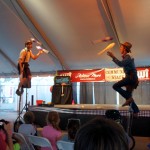 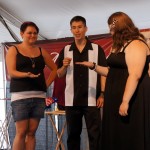 Guard your thoughts! About to read some minds 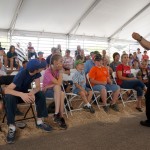 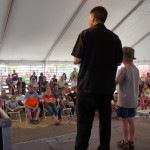 backstage at the magic show 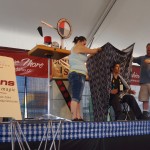 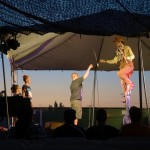 Funny story: one morning I did a short promo piece for the local TV station.  TV anchor and local personality Larry is a local legend and was super to work with.   I kind of doubted that many people would see my short appearance, but several kids later asked me to “do the trick you did on TV” for them.

That evening Boise magician Kipp Sherry and I went out for dinner at a local restaurant. Several of the patrons had seen the video segment and recognized me. So, of course they wanted to see some magic. Kipp had a couple of items with him, wowed the guests, and the owner came over. The owner turned out to be a HUGE fan of magic, everyone had a blast, and she ripped up our check. Who says magic doesn’t work in the real world!

Great news:  I’ll be returning to the Canyon County Fair in Caldwell next year!  Keep up with my public shows and more by being a Facebook fan.