Nothing’s more fun than hanging out with a couple of hundred of magicians at a convention! The Pacific Coast Association of Magicians (PCAM) convention is one of my favorites. My first one was in Calgary in 1997, and I’ve attended every year but one since.  What happens at a magic convention?  There are shows, workshops, lectures, and a room with dealers where you can buy props and unbelievable gimmicks.  But some of the most memorable things happen outside of the more formal sessions.

Last night I was up until 4am as LA pro Joe Monti taught me his zip tie escape and world champion Shawn Farquhar fried my brain and walked me through some wild card tricks.  Really lucky to be able to hang out with good guys like this!

Here are some photos of the Burbank, California convention hosted by my friend Frank Padilla and his team from the Westside Wizards (Society of American Magicians Ring 291) of Los Angeles. 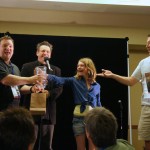 Kind of sums up the Bag-o-Tricks competition – FUN 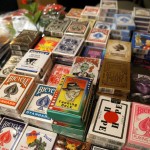 pick a deck, any deck… 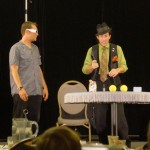 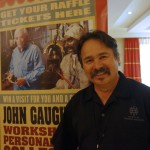 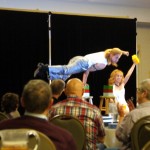 Secret to this “suspension”? A LOT of practice! 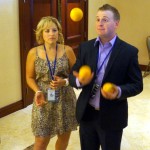 impromptu juggling with Trevor and Lorena 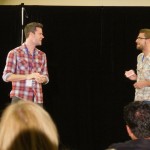 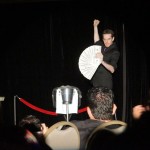 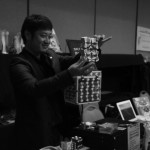 Magic dealer with props and items from Japan 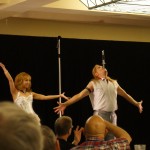 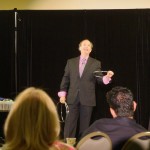 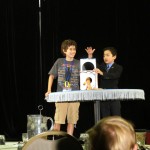 “This may tickle a little…”

A great new tradition began last year at the Seattle PCAM 2012.  PCAM President Brian Cook created the Tony Eng Memorial Peoples Choice Award. This contest features the first place winners of all of the PCAM competitions (junior and adult categories for close-up, comedy, parlor, stage, children’s magic, and mentalism).  Tony Eng was hugely popular and influential magician whose performances and personality touched many thousands of people.  Both a busy professional magician and owner of Tony’s Trick and Joke Shop in Victoria, British Columbia, to know Tony was to love him.  Last year’s winner, Michael Dardant of New Orleans, passed the mantle to the 2013 PCAM Originality Contest winner Steve Owen.  Steve’s manipulation act done to music with bills, jumbo coins, and credit cards  was amazing and classy.