What can I say, I have a fun job!  New Year’s Eve found me at the swank Washington Athletic Club in downtown Seattle.  Robert Laurent, WAC Event Manager, wanted something funny, interactive, and clean for the members and guests.   He heard about me independently from two other people who had seen me (thanks, Andy and Katya) and brought me on board.

The WAC knows how to throw a party.  Decor was phenomenal (see a glimpse in photos below) and the staff was impeccably dressed.  They had a huge conference room with tables full of party favors that they handed out throughout the evening.  Light-up glasses, light-up necklaces, and light-up drink coasters were at every place setting.  The chefs pulled out the stops for the deluxe buffet as well as towers of desserts that were replenished almost like magic. 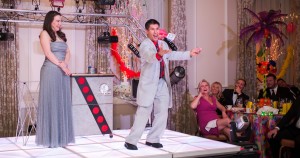 It was my first time performing on an LED illuminated dance stage.  You can see it in the photos where it is a bright white.  When it was time to dance later, the floor came alive with brilliant sequencing colors that changed to the beat of the music.  Cool!

Emcee Darmony and DJs Adam and Dan from Sounds Unlimited did an incredible job.  I’ve never seen so many lights set up for a party.  (They were there the day before to wire and place the lights, trusses, and stage.) 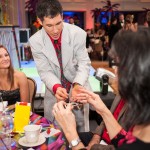 Confetti explosion on the dance floor 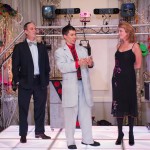 An experiment in Extra Sensory Perception 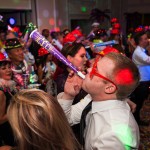 NYE bash at the Washington Athletic Club in downtown Seattle 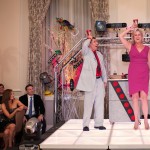 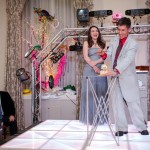 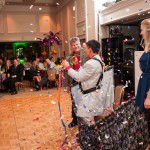 Learn more about the Washington Athletic Club at www.wac.net 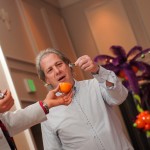 Randy is glad to find his $100 bill in the last place he looked; an orange!

“Thanks again for being Amazing, Incredible, Entertaining, and a very fun guy!  You are TRULY AMAZING, and so entertaining to watch.  I am so glad we secured you for our New Year’s Eve party and I’m sure we will see you here at the WAC again.”
-Robert Laurent
Senior Event Manager, Washington Athletic Club

And let’s not forget about the CONFETTI.  DJs Dan and Adam had an industrial-strength confetti blower and literally covered the dance floor in a foot of confetti.  Woah.

Thanks to John Bang and John Bang Photography for the fantastic photos.  Looking at the images you’d think everything was taken in a studio.  The room lighting was dim to encourage dancing and to make the dance lights and glow bracelets/glasses/favors stand out.  John used camera tricks – and remote control strobes – to make the photos look so good.

Be a fan; connect with me on Facebook.  To learn more about adding clean comedy and interactive magic to your event in Seattle and beyond, call Jeff Evans toll-free (877) 412-5064 or send e-mail to jeff[at]amazementproductions.com.