Don’t listen to us; see what clients just like you are saying about our shows! 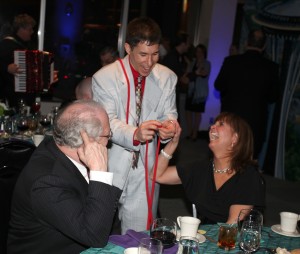 Another satisfied customer! Mingling magic at the Seattle Museum of Flight

“Jeff Evans is an amazing magician and showman! We brought him in for an event at a conference here in Seattle and he did nothing short of dazzle the audience. He did roaming, up-close magic and had the audience engaged. I can’t tell you the number of comments I received during and after the event about how amazed people were with his talent. I would highly recommend Jeff Evans to anyone thinking about bringing a magician to an event as your entertainment. If you are the event coordinator, Jeff is going to make you look really good as the person who brought him in to entertain.”
-Kurt Archambault, Seattle, WA

“Jeff was the entertainment at our holiday party and he was phenomenal! His magic is top notch and just as good as performers I have seen in Vegas. He also knows how to work a crowd and get everyone engaged in fun. Absolutely the best entertainer we have had at a company event! I enthusiastically recommend him to anyone for private parties and company events.”
-Karen Say-Valadez, Tacoma, WA

“Jeff Evans not only provided us with a unique and engaging magic show but also left a crowd of very talented doctors in complete AWE. You are truly amazing Jeff! I’m still receiving compliments from our corporate office and clinics. Once again, thank you for your wonderful show. It was a huge success!
-Marina Cappagli, Seattle

“We hired Jeff for our Employee Holiday Party this year, and he kept us amazed, laughing and in awe the entire time! From the personal strolling magic show to the on-stage performance, he engaged the audience and was truly amazing! It is clear that Jeff is passionate about what he does and he is a true artist. I would HIGHLY recommend Jeff to anyone who wants to have a unique, entertaining and fun experience at their next party.”
-Stephanie Corey, Medina, WA

“Jeff entertained for us at our annual Christmas party. A week later and the staff are still shaking their heads and wondering “How did he do that?” And a good time was had by all, not only is Jeff a wonderful magician, his persona is captivating, he’s funny and engaging.”
-David Kirk, Puyallup, WA

“Jeff was absolutely amazing! We had the pleasure of having Jeff perform on two different nights, one was more informal where he roamed around and the other more formal where he put on a 30 minute show. He was very comfortable and dynamic with each venue. Everyone was completely mesmerized with his tricks and his touch of comedy was just perfect! He went way above and beyond our expectations! Will definitely use him again and highly recommend!!
-Alisa Wilson, Tacoma, WA